At this difficult time for Ukraine, students of the Precarpathian National University, participants of English language courses address the world community with words of appreciation for the support of Ukrainians in our fight against the Russian aggressor.

Special thanks goes to the President of Ukraine for his courage, patriotism, wise decisions; he inspires Ukrainians to fight for their homeland, and world leaders to do more for Ukraine at this time! In this appeal, the students’ pride of our courageous defenders, saying that our Armed Forces is the best army in the world. It is also said that the struggle continues, civilians are dying, including children. Students beg the world to stay with Ukraine and help stop Russia’s war, cynical and vile aggression!

University lecturer, associate professor Tetyana Blyznyuk noted that the world is with Ukraine! “I am touched by the letters received from scientists and educators with whom we have worked on joint projects. They unanimously condemn Russia’s aggression, arrange protests, and raise funds to support Ukrainians. Ukrainians are convinced that our response, together with the international community, to this crime of Russia, which is the greatest humanitarian disaster since World War II, must be decisive, tough, and urgent”. 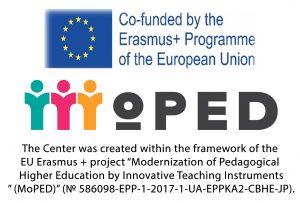